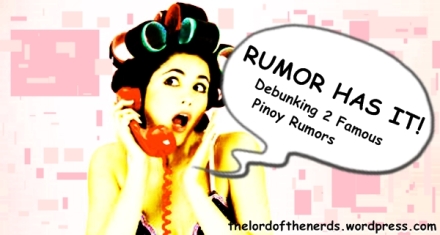 Rumors, rumors and more rumors.  If there’s anything most Filipinos like to do more than anything is to listen to rumors and sometimes, spreading them. For a country that deems Showbiz news as important, most of us sort of feel inclined to mind other people’s business that sometimes, it sparks ridiculous rumors that many believe.

So now, let me shed some light on these two rumors that made noise in the country; what started them and if they’re actually true or not.

The Death of Julie Vega 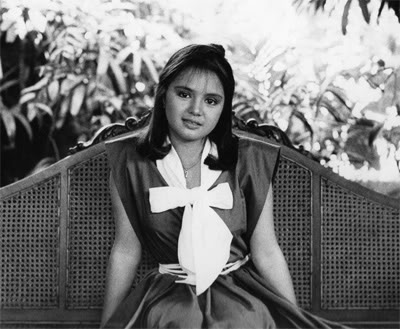 At that time, her cause of death was unknown and it led people to believe that it was caused by the last movie she starred in. It was a horror movie where she plays the daughter of a mortal and a demon where she keeps getting possessed by elementals. Rumor has it that she got cursed by an engkantadaor a fairy. 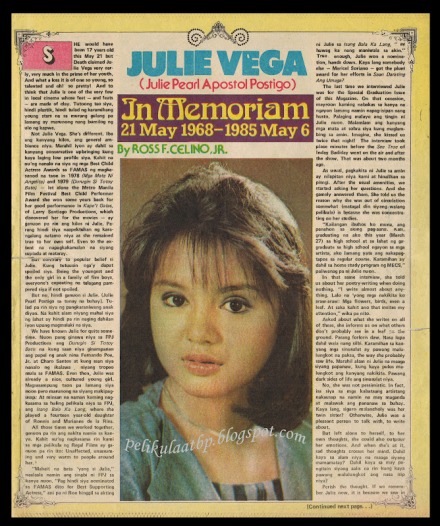 But here’s what really happened: Just after her high school graduation in 1985, Julie Vega complained of body pains, extreme weakness and numbness of the lower part of her body. She was brought to a private hospital to get treatment and was diagnosed with a form of demyelinating disease, which was highly suspected to be either or multiple sclerosis.  Her parents transferred her to a much cheaper hospital since they couldn’t afford the bills anymore. While she was confined, she acquired bronchopneumonia that made her condition even worse. They transferred her again to another hospital where she died of cardiac arrest on May 6, 1985, just 15 days short of her 17th birthday.

Spolarium and the Rape of Pepsi Paloma

Here’s what really happened: This case happened in 1982. Pepsi Paloma accused Joey, Vic and Richie of gang rape. This made headlines and was the talk of the town that time. The case was settled out of court after the trio did a public apology to Paloma and both parties signed an agreement. But according to Paloma, Tito Sotto coerced her to sign the affidavit of desistance to trash the case since rape was punishable by death at that time. Pepsi Paloma then committed suicide and was found hanging by her neck in 1985 apparently because of the trauma and injustice she experienced. 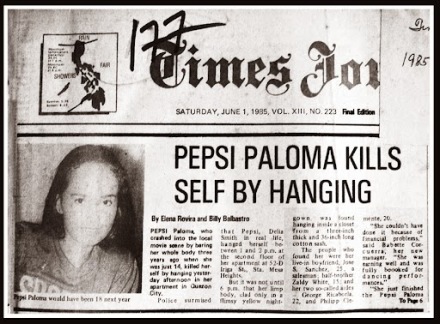 When the band was asked about the meaning of Spoliarium, they denied it being connected to the rape case at all. The origin of the song is in fact very far from it. The song was actually telling about the time Ely Buendia (Eraserheads lead singer) had a drinking spree with his friends. He was about to go home when a friend called him from his condo window in San Juan and asked him to go drinking. He stayed there till three in the morning. The gintongalakreferred to a liquor called Goldshlagger. Enteng and Joey are the names of Ehead’sfriends at that time who wrote Ely’s real name on a mirror but he can’t seem to read it because someone slightly erased it.

6 thoughts on “Rumor Has It: Debunking 2 Famous Pinoy Rumors”

Meet The Lord of the Nerds